Skip to content
Rising Rates 101: How it happened and why it matters

Rising Rates 101:  How it happened and why it matters

Interest rates have surged at the fastest pace since 2009, as inflation has reached levels not seen in forty years, leading to severe indigestion for the stock and bond markets.

The Federal Reserve (“Fed”) utilizes “monetary policy” to control the cost and availability of credit to promote two primary goals; “full” employment and stable prices. In early 2020, the pandemic brought our economy to a halt, threatening another Great Depression.

The Fed quickly revisited its playbook from the Global Financial Crisis of 2008, slashing short-term interest rates to zero (from 1.50%-1.75%) and restarting “quantitative easing” (“QE”), purchasing $120 billion of U.S. Treasury and mortgage-backed bonds in the open market each month.  This constant buying supported bond prices and kept longer-term interest rates low.

Credit became cheap and abundant.  Add $5 trillion of COVID-relief stimulus and two years later our economy has recovered, inflation is stubbornly high and asset prices have soared.  Soon after Fed Chairman Jerome Powell was nominated for a second term in November 2021, he sent investors a clear signal the Fed was preparing to wean the economy from the emergency measures by raising short-term interest rates and halting bond purchases.

This radical change in posture from “dovish” (stomping on the gas with lower rates/quantitative easing) to “hawkish” (slamming on the brakes with higher rates/quantitative tightening) has caused interest rates to soar and worries the Fed’s moves to slow the economy to rein in inflation will lead to a recession.

Conventional wisdom is stocks are “risky” and bonds are “safe.”  Owning stocks is exciting—you can make or lose a bundle.  Bonds are boring—you don’t make much, but you can’t lose money, either.

Governments and corporations borrow by issuing bonds, which are a contract between the borrower and lender spelling out the timing and amount of interest to be paid (i.e., the “coupon”) and when the principal amount borrowed is to be repaid (i.e., the “maturity”).  Because the amount and timing of the cash flows are contractually set, bonds are referred to as “fixed income” investments.

Although the cash flows are fixed by contract, the price of a bond will fluctuate based on interest rate risk and credit risk.

For the past 40 years, the conventional wisdom has been generally correct, as the yield on the benchmark 10-year U.S. Treasury Bond (UST-10) declined from a high of 15.8% in September 1981 to 0.6% in July 2020, as the pandemic crushed economic activity.

When interest rates fall, a borrower can offer new bonds at a lower interest rate than the higher rates on bonds issued in the past, making the fixed income stream on existing bonds more valuable and causing bond prices to go up.  Conversely, when rates rise, existing bonds go down in price.  Picture a teeter-totter with yields on one end and bond prices on the other. 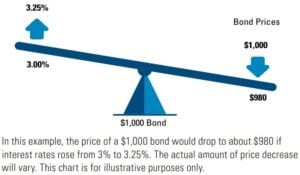 Thus, bond investors enjoyed a bull market for the past four decades.  Alas, all bull markets end and the first quarter of 2022 proved it’s possible to lose more money in an asset class traditionally known for its safety than in stocks, with the April 1 headline in The Wall Street Journal blaring, “Bond Market Suffers Decline Not Seen in Over 40 Years.”

Mortgage rates track the UST-10, so homeowners benefitted from both the lowest rates in history and the related surge in property values.  The interest rate on the 30-year fixed rate mortgage went from over 18% in September 1981 to under 3% during the pandemic.  The rate recently surged to 5.27%, the highest since 2009.

On the bright side, U.S. Treasury I-Bonds—low-risk savings bonds indexed to inflation—will earn a whopping 9.62% annualized over the next six months, significantly more than a typical savings account or CD.  The rate resets in May and November, based on the six-month change in the Consumer Price Index (CPI).  You can acquire up to $10,000 in electronic I-Bonds per person, per year on TreasuryDirect.gov.

You must hold I-Bonds for at least 12-months before redeeming and forfeit the last three-months of interest as a penalty if you redeem before five years.