We always preach focusing on the “long-term,” but after the brutal fourth quarter of 2018, we’re very pleased to report a great first quarter of 2019, both on an absolute and relative basis. The S&P 500 had a total return of 13.65%. We feel particularly good about this result given “Value” continued to underperform “Growth” during the quarter, albeit at a decreasing rate.

“Way back” in December, stock prices collapsed as investor anxiety reached a fever pitch over the Federal Reserve raising short-term interest rates too quickly, the threat of a tariff spat with China morphing into a full-blown trade war and the inability of our political leaders to prevent a government shutdown. As always, the financial media was quick to pounce on the opportunity to fan the flames of panic with headlines screaming about December 2018 being the worst December for stocks since the Great Depression, Christmas Eve being the worst in history and 2018 the worst year since the Global Financial Crisis a decade ago.

Fortunately, after witnessing the S&P 500 plummet 6.2% from the December 19 announcement of the fourth rate hike of 2018 and signal of 2-3 additional hikes in 2019 to December 24, Fed Chairman Jerome Powell performed an abrupt 180 degree turn by first assuring investors the Fed is “listening carefully to the markets” and then indicating no further increases in 2019. Investors were cheered this will be a pause that refreshes. Additionally, a long-awaited trade deal with China could be imminent.

Back From the Abyss

The doom and gloom headlines from December turned suddenly ebullient as the S&P 500 posted a total return of 13.65% for the first quarter of 2019, its best performance since the third quarter of 2009 and strongest first quarter since 1998. The Wall Street Journal trumpeted “Stocks Post Best January in 30 Years” to “Stocks Set Torrid Pace to Open Year” and finally “Stocks Surge to Cap Banner First Quarter.”

Warren Buffett said, “Investing is simple, but not easy.” The experience of the fourth quarter of 2018 and first quarter of 2019 is the perfect example. You have to keep your head when most others are losing theirs. Focus on the signal and ignore the noise. It can be brutally difficult at times, but as investors this is what you signed up for. As Sir Edmund Hillary said, we must conquer ourselves to succeed.

Understand stock prices fluctuate wildly, but the underlying business valuations don’t. According to the illustration from Crandall Pierce (next page), Corrections (drops between 10-20%) and Bear Markets (drops > 20%) occur once every two years, on average, so are part of the normal investment landscape. The frightening drop of -19.78% for the S&P 500 between the peak on September 20, 2018 and December 24, 2018 was the 37th such occurrence since 1945. There will be a 38th, but nobody can tell when it will happen. 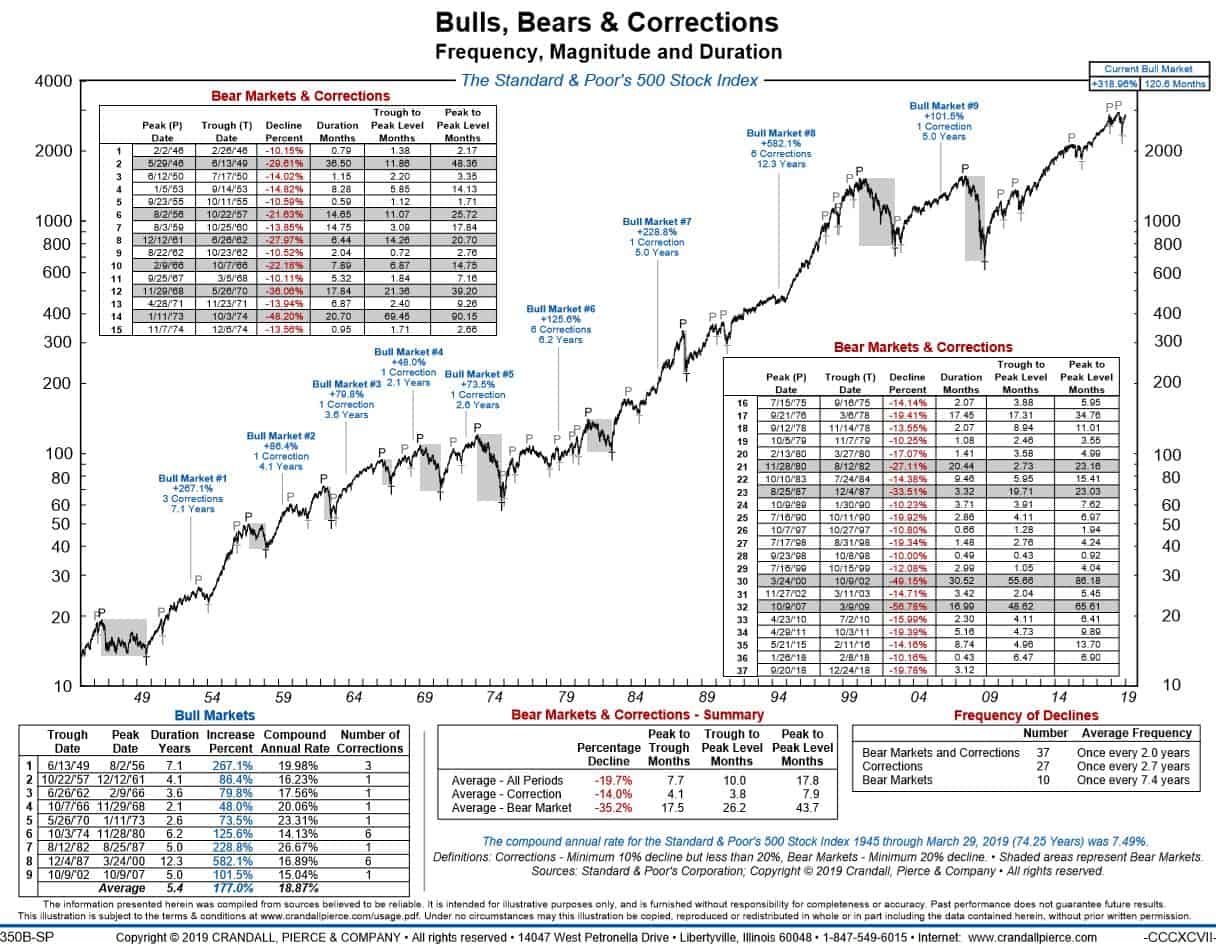 If you had taken a 6-month nap from the end of last September through the end of March, you’d find the S&P 500 had declined less than 3%. You would have missed the panic in December and rocket ship rebound in January-February. In other words, you would have witnessed very little fluctuation.

This teaches us an important lesson. If we aren’t comfortable with the amount of fluctuation in our investments, the best thing we can do is stop looking. We may not be able to control the amount of volatility in the markets, but we can control how much we experience. It is simply a function of how often we look.

The Yield Curve Inversion Panic of 2019

It is a fact of life investors always have a cornucopia of potential problems to worry about and when one of them pops its head up, market pundits and soothsayers are quick to pounce and pour gasoline on the fire. Don’t fret, it’s what they do. You don’t get mad at a dog for barking.

The most recent example was the yield curve inversion that occurred on Friday, March 22, which unleashed an immediate 2% decline in the S&P 500.

First, some background information. Investors lend money to the U.S. Government by buying bonds that “mature” (i.e. date the principal or amount you lent comes due) at various points in the future. The yield curve simply plots the yield on U.S. Treasury securities from shortest- (like 3-months) to longest-maturity (like 30-years). Most of the time, the yield curve has a positive slope, which means longer-maturity securities have a higher yield compared with securities with shorter-maturities. The reason for this is when the economy is growing, investors holding longer-maturity securities assume increased risks of inflation, which can lead to the Fed raising interest rates. Bond prices go down when rates go up and the longer the maturity, the more sensitive the price is to a change in interest rates. It’s confusing, but trust us.

However, occasionally the yield curve “inverts” as long-term rates fall below short-term rates. This inversion occurs when investors believe the economy is slowing, leading to expectations for lower inflation and the Fed reducing interest rates. The difference between short- and long-term rates can also be a proxy for bank lending. Banks tend to borrow at short-term rates (think deposits) and lend at long-term rates (think mortgages) and make their money off that spread. When that spread shrinks, it’s harder for banks to make profitable loans, which can make loans harder to get. The series of rate increases by the Fed means savers can now earn 2%+ after many years of having to settle for 0%. At the same time, rates on 30-year mortgages have dropped to around 4%, which is making life tough for bankers.

You can see this phenomenon on the graph from JP Morgan Asset Management below that shows how the yield curve has shifted and flattened over the past five years. 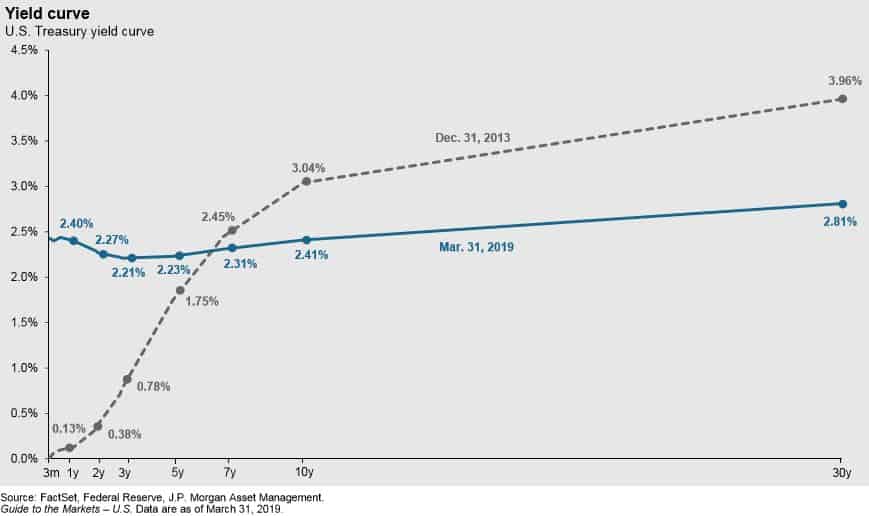 The reason an inversion of the yield curve is important is many investors view it as an infallible predictor of an impending economic recession. It’s not. While it’s true each of the seven recessions since 1962 was preceded by an inverted yield curve, there were also instances when an inverted yield curve was not followed by a recession. Not only can an inverted yield curve prove to be a “false positive,” it tells you nothing about how long it will be until a recession appears (typically 9-24 months) nor the severity. In fact, according to Canaccord Genuity, the initial inversion is actually a pretty good “buy signal” for stocks, with a median gain for the S&P 500 from the inversion to the eventual stock market cycle peak of 21%.

Economic growth is probably slowing and it’s inevitable the current economic expansion will eventually be followed by a recession. Still, it’s extraordinarily difficult to say when it will occur or how deep it will be. Human nature is to seek simple answers to complex questions. The yield curve has regained its slightly positive slope and the Conference Board Leading Economic Index (LEI) is still in an uptrend (below). As legendary investor Paul Samuelson once observed about another fallible indicator (stock prices), “ the market has predicted nine of the last five recessions.”

We think this is yet another example of the need to focus on the signal and ignore the noise! 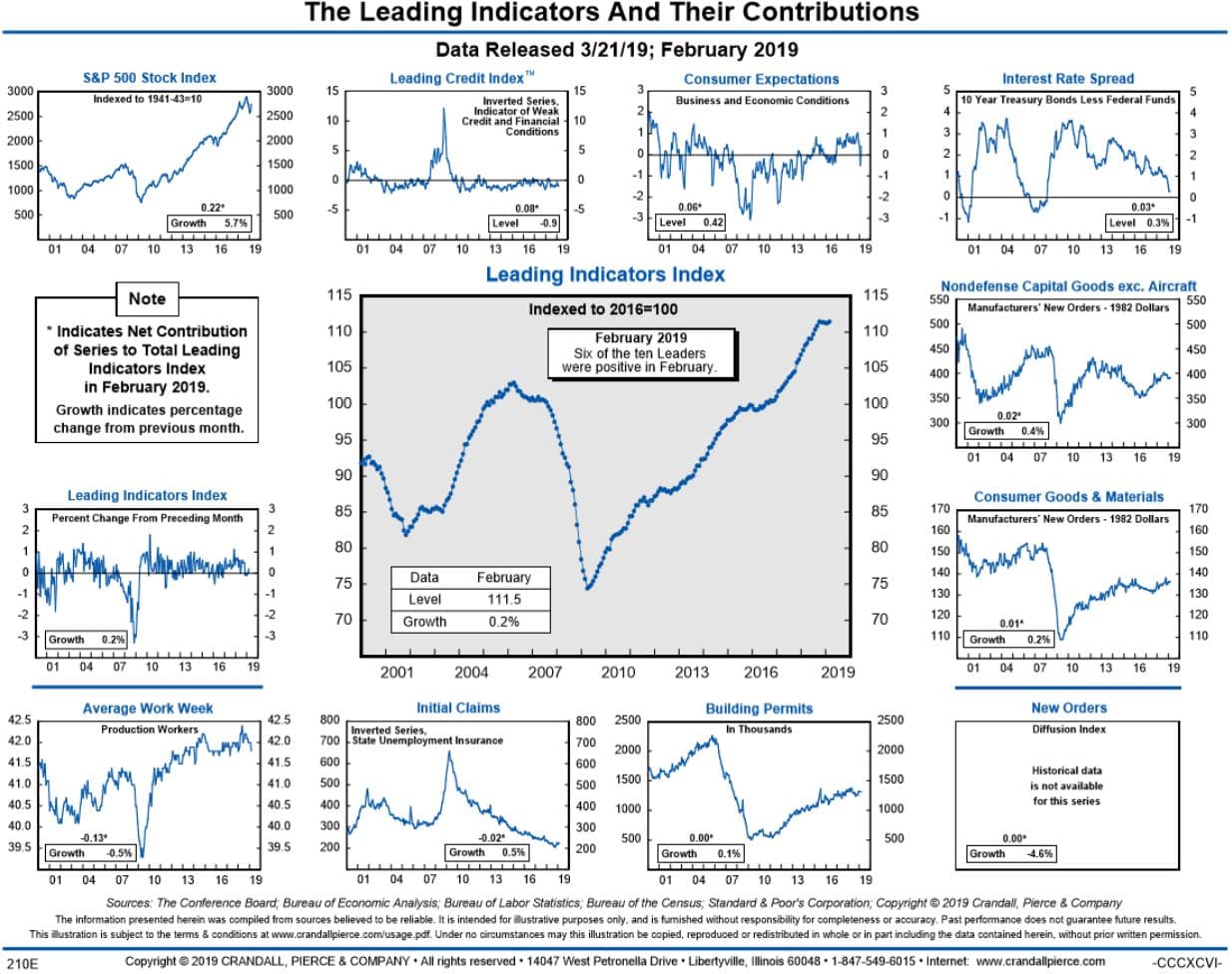 They say a picture paints a thousand words and these two graphs from our friends at Strategas Research Partners show Value is 1) historically extremely cheap on a Next Twelve Months Price-to-Earnings (NTM P/E) basis vs. Growth and 2) still underperforming vs. Growth, albeit at a slightly less severe rate. 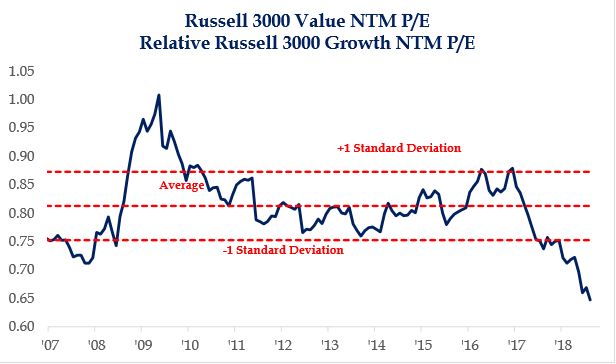 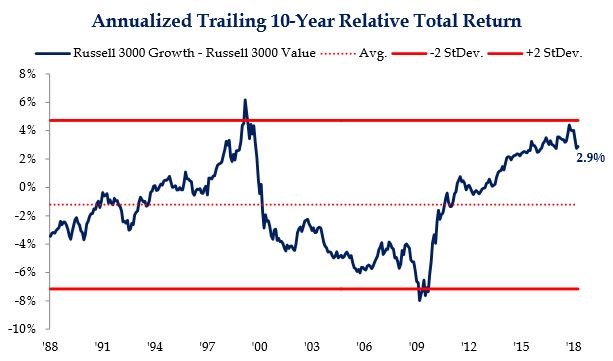 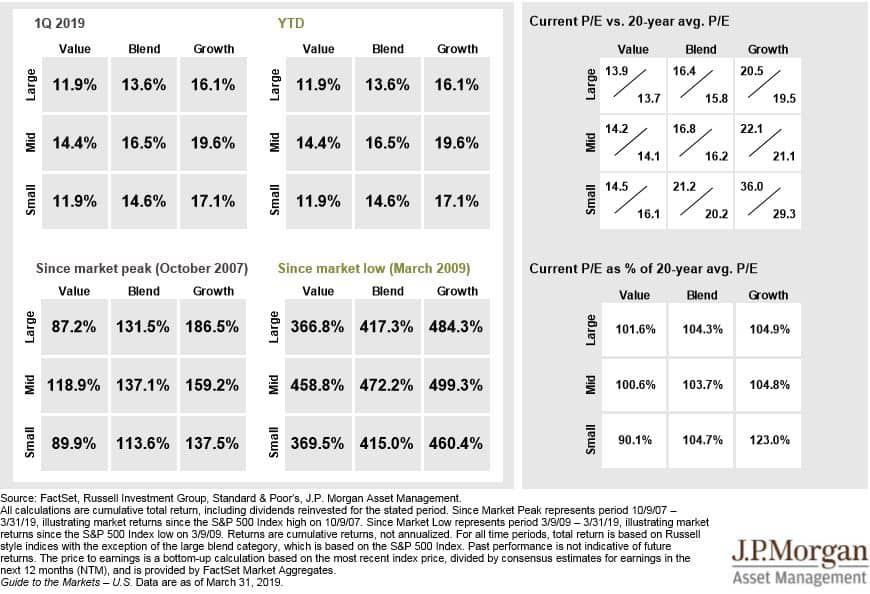 We’re fully aware one good quarter doesn’t make a trend, but are still encouraged about the prospects for client portfolios. Past performance is no guarantee of future results, but according to S&P Global, there have been 28 times since 1945 in which the S&P 500 was up in January and again in February (like 2019). In all 28 times, the S&P 500 finished up for the year and averaged a total return of 24% (range of 2% to 52%).

It would be great to be able to “time the market,” but nobody can jump in/out at consistently the “right” time. As we experienced in January-February, prices can move rapidly in both directions. We were able to make some timely buys, but would have been pleased had prices remained depressed a couple weeks longer.

We think the key to long-term investment success is buying the right businesses at attractive prices and letting the miracle of compound interest work its magic. We thank you for your business and strive to earn your trust and confidence each day.

Kirr, Marbach & Company, LLC (KM) is registered with the U.S. Securities and Exchange Commission (“SEC”), which requires advisers to file Forms ADV-Part 1 and 2A (“Brochure”)/2B (“Brochure Supplements”) electronically on the Investment Adviser Registration Depository (www.iard.com). KM filed its Forms ADV-Parts 1, 2A and 2B on March 5, 2019. Part 2A is a narrative disclosure of an adviser’s business, written in “plain English.” The SEC mandated the headings, specific topics to be covered and the order of presentation. We have enclosed a copy of KM’s ADV-Part 2A “Brochure” for each client account.

Past performance is not a guarantee of future results.
The S&P 500 Index is an unmanaged, capitalization-weighted index generally representative of the U.S. market for large capitalization stocks. This index cannot be invested in directly.
The Conference Board Leading Economic Index® (LEI) for the U.S. is one of the key elements in an analytic system designed to signal peaks and troughs in the business cycle. The leading, coincident, and lagging economic indexes are essentially composite averages of several individual leading, coincident, or lagging indicators. They are constructed to summarize and reveal common turning point patterns in economic data in a clearer and more convincing manner than any individual component – primarily because they smooth out some of the volatility of individual components. The ten components of Leading Economic Index for the U.S. include: • Average weekly hours, manufacturing • Average weekly initial claims for unemployment insurance • Manufacturers’ new orders, consumer goods and materials • ISM Index of New Orders • Manufacturers’ new orders, nondefense capital goods excluding aircraft orders • Building permits, new private housing units • Stock prices, 500 common stocks • Leading Credit Index™