We’re pleased to report client equity portfolios posted strong performance in the first half of 2019, particularly given “Value” stocks continued to underperform “Growth” stocks. The rise in U.S. stocks was anything but a straight-line advance as they continued their roller coaster ride in the second quarter of 2019. In April, stocks built on their first quarter gains (the S&P 500 climbed back to its high reached in October 2018) but faltered sharply in May on harsh rhetoric from the U.S. regarding trade with China and Mexico. Fortunately, “dovish” comments from the Fed on interest rate policy and indications of progress in easing trade tensions led the S&P 500 to its best June since 1955 and best first half since 1997.

What a difference six-months makes! ‘Twas the night before Christmas (2018) and the December stock price collapse reached a crescendo (DJIA -653.17 points) as investors seemingly lost their collective minds on fears of the Federal Reserve raising short-term interest rates too quickly and the threat of the on-again tariff/trade spat with China escalating into a full-blown trade war. Who could have guessed by the end of June (2019), the S&P 500 would be up more than 25% from that panic low and reach a record high on the Fed’s 180 degree shift signaling future reductions in rates and a pause in the trade hostilities with China?

This is a great example of the tremendous benefit of being able to keep your head when all those around you are losing theirs and the cost of not being able to do so. Understand we have a primordial survival instinct that the modern media tries mightily to fire-up every time stocks are under stress. Remember the more often you look the more volatility you experience, so try to tune out the noise and stick with your long-term plan.

Paul Hickey of Bespoke Investment Group examined returns for second halves of calendar years (H2s) following first halves (H1s) when both stocks and long-term U.S. Treasury bonds returned more than 5% (next page). Recall during the bull market for U.S. stocks from the March 9, 2009 low, positive performance for stocks coincided with weaker performance for bonds and vice-versa. When it was “risk-on” for investors, stocks gained and bonds dropped and when it was “risk-off” the opposite occurred. The double-digit returns for stocks and bonds in H1-2019 was an anomaly that has happened in only four prior years since 1980. In fact, the S&P 500’s average H2 return following the nine H1s where both stocks and bonds were up over 5% was 11.3%, with positive returns in all but one (1986 was -1.79%). This was more than twice the average H2 return for all H2s since 1980. 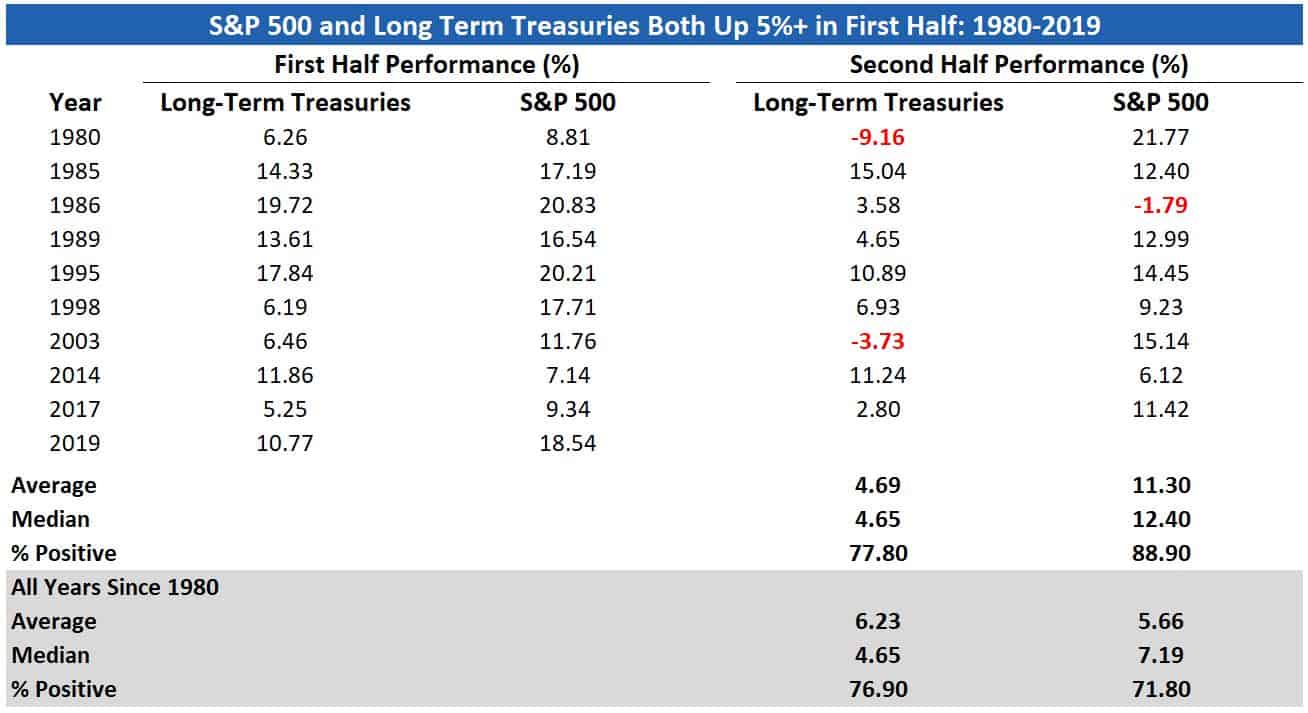 Similarly, according to Sam Stovall, Chief Investment Strategist of CFRA, the strong H1 bodes well for H2-2019, but with an important caveat. Since 1945, following H1 gains of 10% or more for the S&P 500, H2 rose an average 7.5% and was up 80% of the time, as compared with an average gain of 4.1% and 69% up for all H2s. Stovall further noted while in 2019 the S&P 500 recorded its third strongest year-to-date (YTD) return through April since 1945, history warned May would likely be weak (it was) but June should rally (it did). Examining returns for the remaining months following the previous five strongest starts to the year, the S&P 500 fell an average 5.2% in the July-through-October period and declined in price 80% of the time. While history suggests the road is likely to get increasingly bumpy over the next four months, it will be important (as always) to try to remain unemotional and stick with the plan. Indeed, stocks traditionally regained their footing in the final two months of the year. For the five strongest starts, the S&P 500 gained an average 3.1% during November-December and advanced 80% of the time.

June and the first half of 2019 were terrific. While the fundamentals underpinning the stock market’s recent advance are still good, risks related to China/global trade, Iran, North Korea and a host of others, known and unknown, remain elevated. We’re not predicting a sequel to the Christmas Eve Massacre, but it’s best to remember stock prices are inherently volatile and scary downdrafts can occur at any time for any or no reason at all. Indeed, in just the past 18-months U.S. stocks experienced a correction at the beginning of 2018, a near-bear market in late 2018 and an ugly May of 2019. In addition, according to Stovall the third quarter is “notorious for delivering the weakest average price return, while recording the deepest decline and greatest volatility.” In other words, keep your seatbelts fastened!

Outperformance of “Growth” vs. “Value” Has Reached Epic Proportions…

As shown in the graph from Bespoke below, the growth stock-to-value stock performance ratio has just moved above its prior high from June 2000. There is no telling how much further this rubber band can stretch, but the prior peak coincided with the bursting of the technology/dot-com bubble. We think the pendulum will swing back to “Value” at some point. We can’t say when, but as Mr. Edison said, we’re not about to give up. 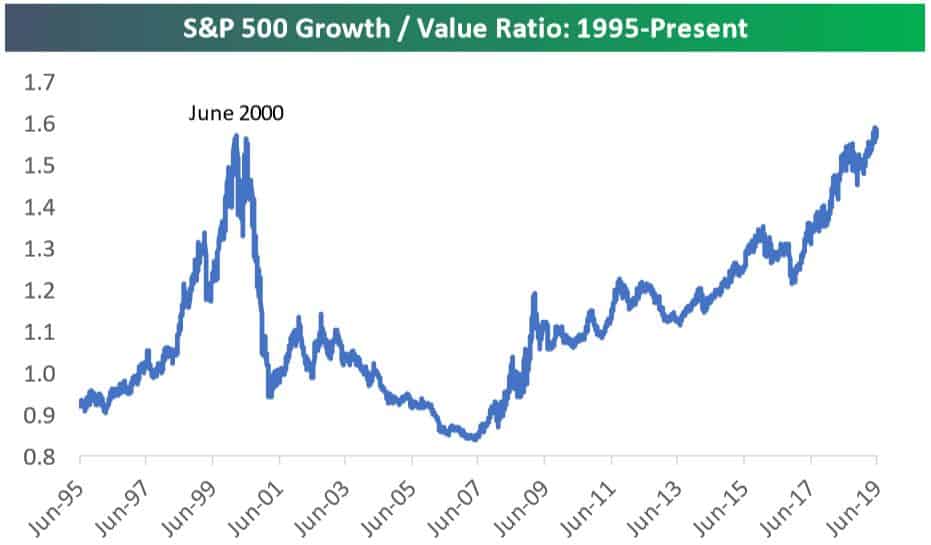 ….Which has Resulted in “Value” Stocks Being Cheaper Than They’ve Ever Been

As shown in the graph from J.P. Morgan below, on the basis of relative price-to-earnings ratio, “Value” has reached a historical level of cheapness vs. the S&P 500 (about 7 multiple times less). Again, the last time this occurred was during the technology/dot-com bubble. 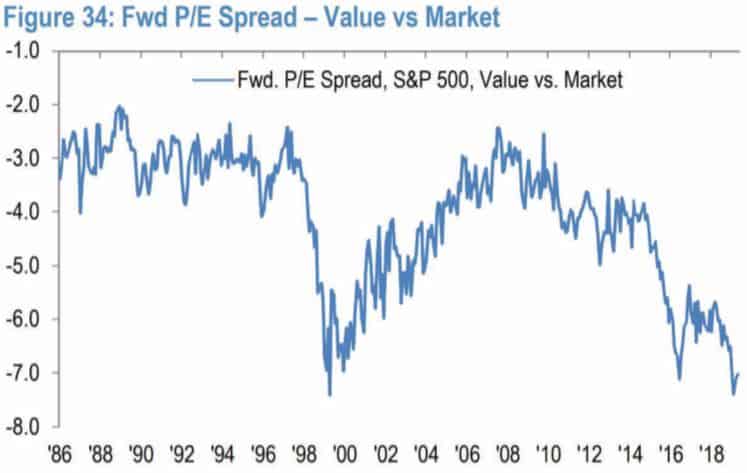 The Economic Expansion is the Longest/Weakest in History…

As shown in the graph from J.P. Morgan Asset Management below, the current economic expansion that started July 2009 is now 120 months old, well above the average expansion of 48 months. However, the strength of the recovery since prior peak (Q4-2017) is also the weakest. 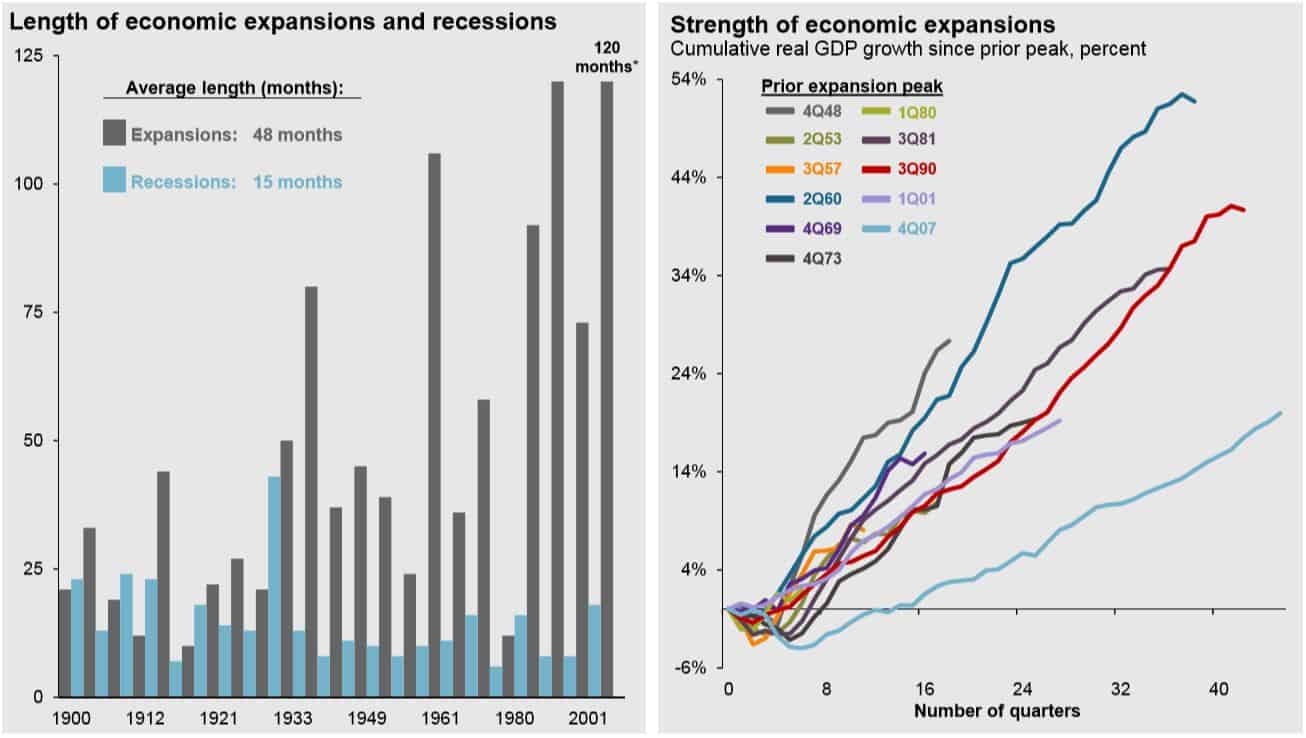 Recessions are a normal, inescapable part of the investment landscape and nothing to fear. Trade tensions are slowing economic activity, but employment remains robust and inflation low. In addition, recessions usually occur when the Fed has become overly aggressive in raising interest rates to cool off an overheating economy. This is certainly not the case now. Additionally, the table from Credit Suisse on “Recessionary Risk” below lists several factors that generally indicate heightened risk of recessions, none of which are present today.

We are halfway through 2019, and there have already been two market surprises that may leave investors scratching their heads and wondering what is next. One surprise was the strong market performance in the month of June. Some believe that summer months produce poor returns for stocks, insomuch that there is an old investment adage, “Sell in May and Go Away.” This looked like pretty good advice as we experienced negative markets in May, but that all changed in June. The stock market experienced one of the best June’s in decades – an unexpected result.

This is a great reminder that surprises happen when investing. We may not be able to predict what will surprise us or when, but we can confidently predict that we will be surprised by something (meaning something unexpected happens). For this reason, we believe we should focus our efforts on finding good companies whose stocks are selling at great prices, rather than trying to forecast future events like trade disputes, international crises or elections, all of which experience has taught us are unknowable.

Kirr, Marbach celebrated its 44th Anniversary on May 1, 2019. Over those decades we have witnessed numerous bull and bear markets, economic booms and busts and seen many fads come and go. Through it all, our commitment to you has remained unwavering and we thank you for the trust and confidence you place in us each and every day.

We are so pleased Kathy joined our business in June as an Operations Administrator. Kathy spent the past 20 years at our local newspaper, The Republic, and was most recently the Advertising Operations Manager. She is training with Mary Jo Cusano, who will be retiring at the end of the year after a distinguished 27-year career at KM.