What a difference year makes! ‘Twas the night before Christmas (2018) and the December stock price collapse reached a crescendo (DJIA -653.17 points) as investors seemingly lost their collective minds on fears of the Federal Reserve raising short-term interest rates too quickly and the threat of the on-again tariff/trade spat with China escalating into a full-blown trade war. The S&P 500 would lose 13.5% in the fourth quarter of 2018 (at one point a whisker shy of a bear market decline of 20% from its then peak on September 20, 2018).

As always, the financial media was quick to pounce on the opportunity to fan the flames of panic with headlines screaming about December 2018 being the worst December for stocks since the Great Depression, Christmas Eve being the worst in history and 2018 the worst year since the Global Financial Crisis a decade ago.

Our response in our interim update on December 24, 2018, “KM’s Thoughts on Recent Market Volatility (Volume 2)”, was to say we had been though many such troubled times since our founding in 1975 and firmly believed “this, too, shall pass.” Further, the stocks owned in client portfolios were trading at their steepest discount to our calculated “target price” in the past ten years, which meant their upside potential was as great as it had been in a decade.

Fast forwarding 12-months, our advice to hold firm in the face of adversity was proved correct as the headlines changed to celebrating 2019 as being the best year for U.S. stocks since 2013. The Federal Reserve did a 180-degree pivot from raising interest rates in 2018 (and indicating further increases in 2019) to first pausing tightening (saying they were “listening carefully to the markets”) and eventually cutting rates three times (promising no increases until inflation arises “that’s persistent and that’s significant”) in 2019. The U.S. and China announced a “Phase One” trade deal (still to be signed). Congress passed the United States-MexicoCanada Agreement (USMCA) for trade and a 2020 spending bill to avert a repeat of last year’s government shutdown, both on a bipartisan basis.

This is not to say investors experienced a smooth ride in 2019. Aside from the aforementioned government shutdown, investors faced rhetoric surrounding trade tensions between the U.S. and China that turned heated, a panic in March caused by an inversion of the yield curve, a slowdown in global manufacturing and the specter of impeachment. In other words, just another day at the office!

For stocks, it doesn’t get much better than 2019

History suggests 2020 should be decent for stocks, but investors should temper expectations

As shown in the graphs from Strategas below, going back to 1948, stocks have experienced the strongest returns by far in Year 3 of the “Presidential Cycle,” so the strong performance in 2019 was consistent. This year will be a Year 4, so if the pattern holds, investors should expect much more modest returns in 2020. 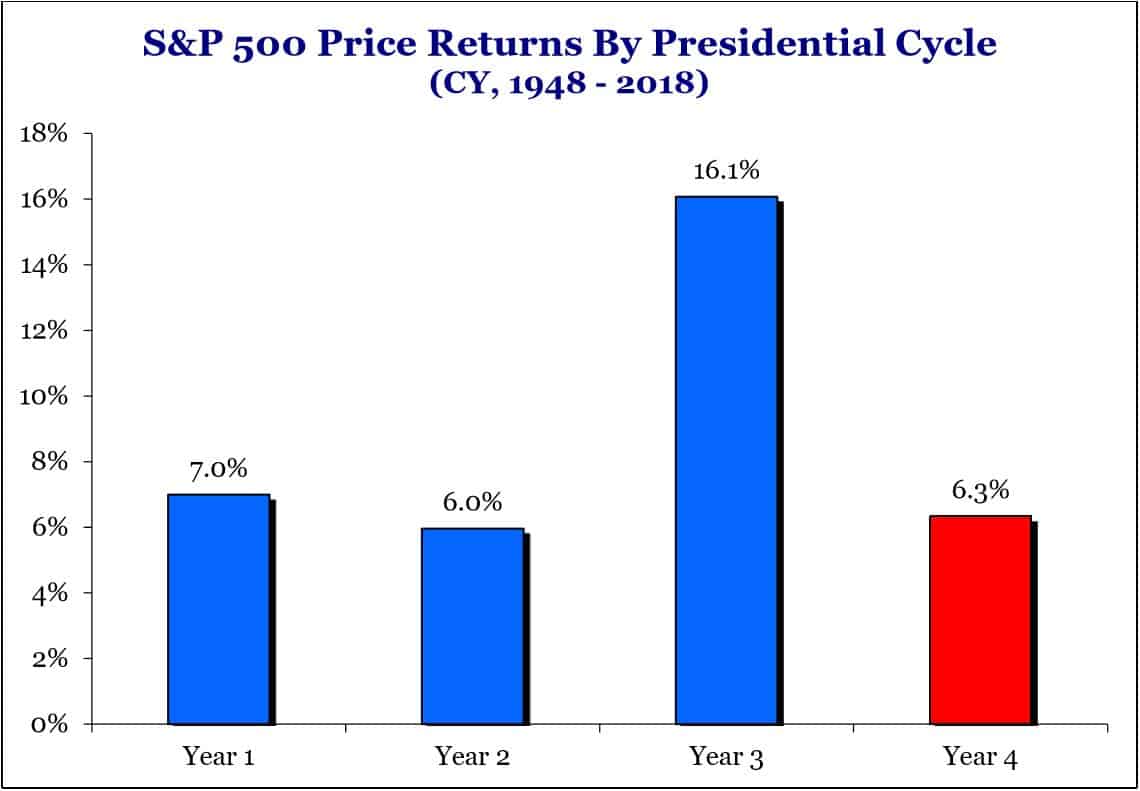 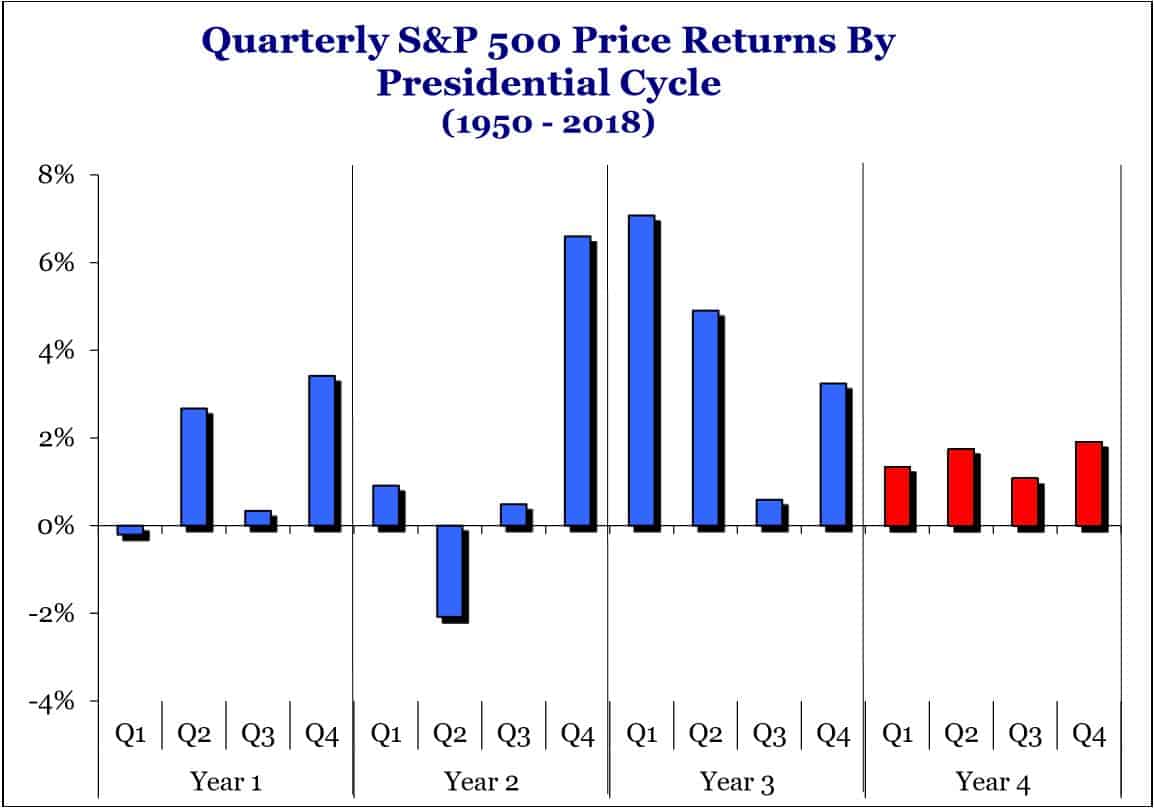 According to Bespoke, since 1900 the Dow Jones Industrial Average (DJIA) has gained an average of 5.1% in the 20 prior years that followed a gain of between 20% and 30%, lower than the historical average of 7.5% for all years. Additionally, following those 20 prior years, the DJIA finished higher 60% of the time, which is again lower than the 65% frequency of positive performance for all years. 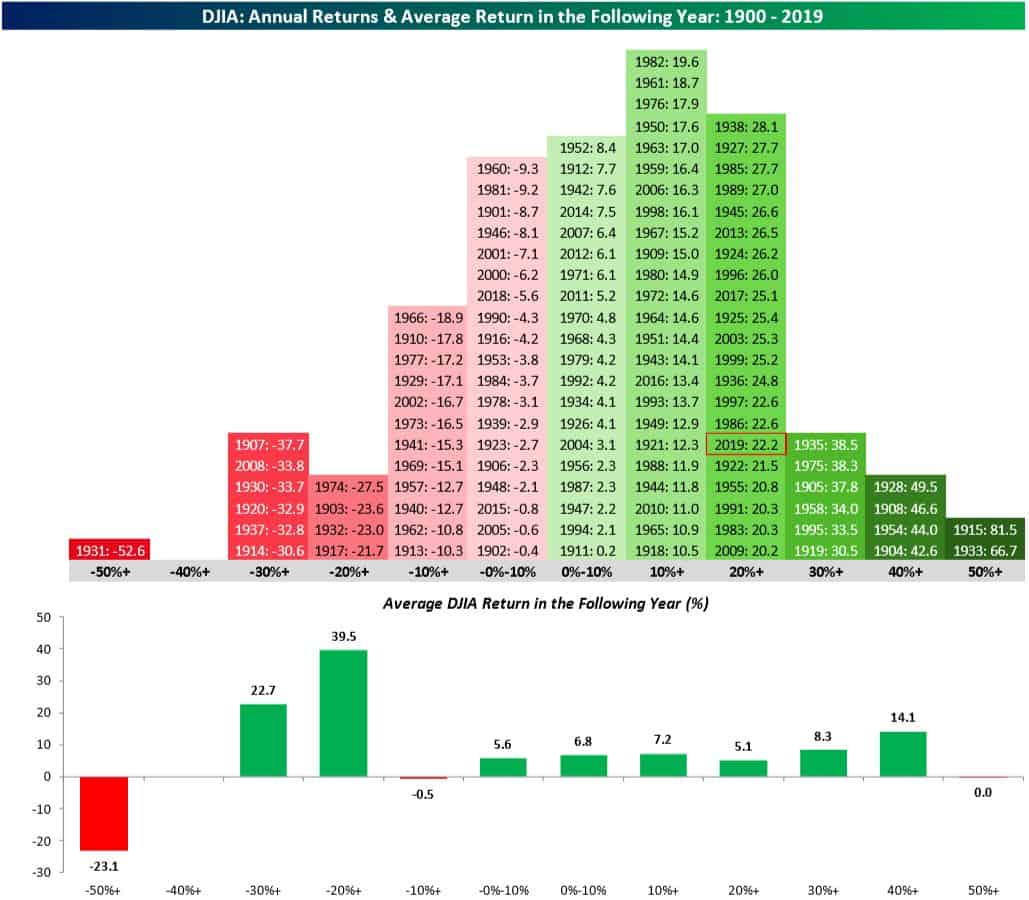 We’ve noted more times than we can count the massive and unprecedented underperformance of “Value” vs. “Growth” over the past decade and argued until we’re blue in the face the relative performance pendulum was bound to swing back towards “Value,” at some point. We noted in our Q3-2019 update that a positive reversal had occurred in September. As you can see in the Bespoke 2019 Scoreboard, that reversal continued in Q4-2019, at least for the S&P 500-Value and S&P 400 Midcap-Value.

We think continuation of this trend is well-supported by valuations. According to CFRA, the S&P 500-Value is trading at a 4% discount to its average P/E since 2003, whereas the S&P 500-Growth trades at a whopping 24% premium.

…But the environment for “active” managers remains brutal

This painful reality is displayed in the chart below from Societe Generale SA, which shows the percentage of 16,000 stocks from around the world that have managed a better return than the S&P 500 over a one- and two-year basis. About 20% of stocks outperformed over a two-year basis, which means about 80% underperformed. 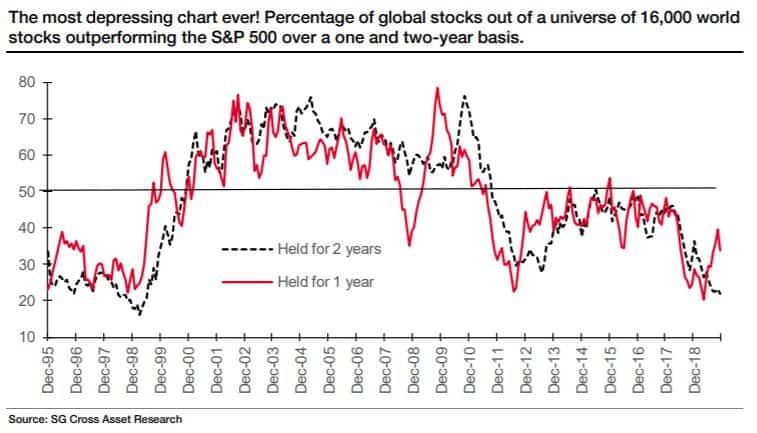 The picture remains similarly bleak when you examine the internals of the S&P 500 itself. The chart below shows the rolling five-year performance of the equallyweighted S&P 500 compared to the main S&P 500. Recall the S&P 500 is a capitalization-weighted index. Apple is the largest capitalization stock in the index ($1.1 trillion) and has a 4.6% weighting in the index. Apple had a total return of 89% in 2019, so combining an oversize weighting with a huge gain was great for the performance of the S&P 500. 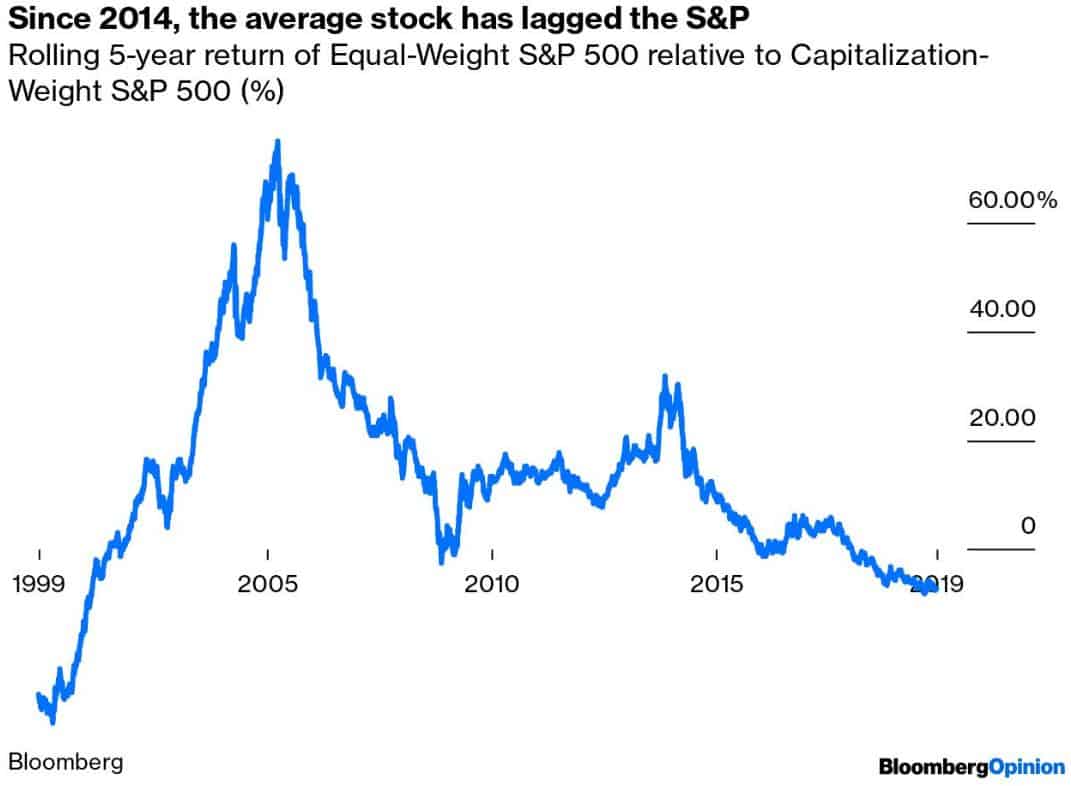 When this ratio is below 0, this means that the average stock is doing worse than the main index. As you can see, the past five years have been brutally difficult time for active, stock-picking managers (like us) to compete.

This time, the “FAANG” stocks (Facebook, Apple, Amazon, Netflix and Google’s parent company, Alphabet) have experienced an extended period of tremendous performance. This has helped power the performance of the S&P 500 and led to the passive indexing craze over the past decade. Like all investment fads that came before it, we’re confident “passive” will fade, but where/when it stops, nobody knows.

Stocks are obviously not as cheap as they were 30% ago, but we still think 2020 could be a “decent” year. We don’t forecast the economy or markets (which is like trying to predict a casino game). No matter how much we wish, no one can predict the market. No one will know when to go to cash and when to go all in. Like a broken clock, sometimes forecasts can be correct, but they lack persistence. Anyone who tells you differently is not being truthful.

Our non- forecast is persistent and reliable because it is based on how we feel, and temptations we face as investors. Not only are these more predictable than market outcomes, they are also more important to investor well-being.

While we cannot control the volatility and outcomes of the stock market, we can control how we behave and respond to market outcomes. Financial markets are only one side of the investing equation; the other side is the choices you make. We think it’s best to focus on the part we have control over. Additionally, understanding what we may face can help us improve our decision-making process.

Successful investing is simple, but not easy. It is difficult to stick with a strategy when it is out of favor. Patience and discipline are virtues because they aren’t easy, yet they are essential for your success. As your adviser, one of our most important roles is helping you decipher the noise from what really matters for your financial success, as we did at the end of 2018.

We wish you a prosperous, fulfilling and happy 2020. Thank you for allowing us to be your trusted partner along the journey.