The financial markets and economy have been hit by their own metaphorical Hurricane Ian in 2022.  Following a brief respite in July, stocks ended the third quarter firmly in “bear market” territory (down more than 20%).  Bonds, historically considered “safe” investments compared with stocks, have also been crushed, as the yield on the 10-year U.S. Treasury Bond (UST) more than doubled from about 1.5% at the start of the year to almost 4%.  Mortgage rates track the UST, so the average interest rate on 30-year mortgages has surged from about 3.1% at the start of 2022 to 6.7% (highest since 2007), slamming the brakes on housing and refinancing.

The root cause of this pain has been inflation, which we have all been encountering in our daily lives, whether it’s at the grocery store or gas pump.  The inflation the Federal Reserve (Fed) confidently forecast was “transitory” (i.e. soon to self-correct) in 2021 soared to levels not seen in 40-years in 2022, compelling the Fed to violently reverse course by raising its target for short-term interest rates from around 0% at the start of the year to 3.00%-3.25% (in increments of 0.25% (March), 0.5% (May), 0.75% (June), 0.75% (July) and 0.75% (September)), while signaling more increases to come (possibly peaking as high as 4.6% in 2023).  The Fed also reversed course from its policy of “quantitative easing” (massive purchases of bonds, which held down long-term interest rates) to “quantitative tightening.”

As Bespoke Investment Group reported and displayed in the graphs below, “the Fed’s crusade against inflation has resulted in a record destruction of wealth in dollar terms and an extremely large drawdown in percentage terms.”  The “bear market” has erased almost $13 trillion in market value from stocks.  Supposedly “safe, investment-grade” bonds have shed almost $3 trillion, a record in both dollars and percentage.  Cumulatively, the total drawdown in market value of the stock and bond markets comes in just shy of $16 trillion or just over 20%.

Combined with high inflation and recession fears, this is having a chilling effect on consumer confidence and economic activity. 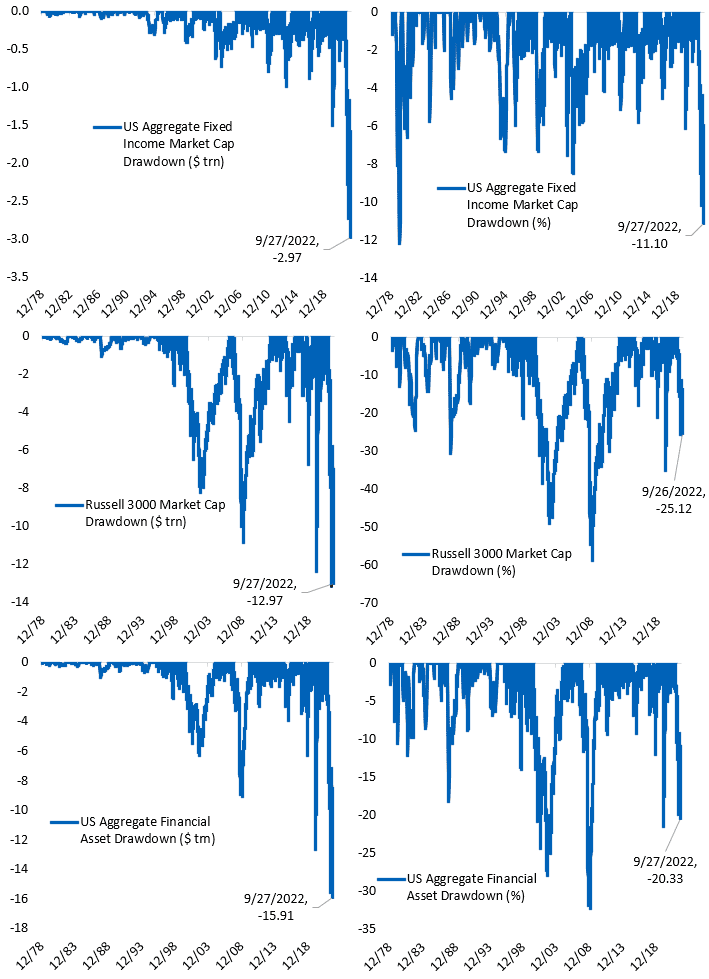 When the inevitable storm hits, rely on your plan–not unreliable forecasts

In stressful and frightening times like these, it’s natural investors hunger for certainty to important questions like 1) how much lower will stocks go, 2) how much higher will interest rates go, 3) how much will the Fed have to raise interest rates to tame inflation and 4) are we in or headed for a recession and how deep will it be.

Unfortunately, the financial media was built to satiate this appetite as an “all-you-can-eat” buffet of forecasts offered by a veritable army of financial “experts,” pundits, carnival barkers and soothsayers.  Forecasters know fear sells and their forecasts are “click bait” to be monetized.  Competing for eyeballs, an outlandish, but seemingly well-reasoned doomsday prediction is catnip to the fearful.

It’s almost enough to cause you to abandon your long-term plan.  Don’t do it!  Two of the greatest minds in investing believe economic and market forecasts offer only the illusion of certainty and you should never base your decisions on them.

According to Marks, the trouble with trying to model the economy or financial markets is they are incredibly complex.  There are literally a million moving pieces which are both interdependent and can change in importance depending on the mood of the day.  The law of gravity says an apple falling from a tree drops down, not up or sideways (ask Sir Isaac Newton).  1+1=2, every time.  If the economy and markets moved based strictly on data, they might be easier to understand and predict.  Unfortunately, while NASA can land a spacecraft on a moving object a billion miles away, nobody can model or consistently and accurately predict the economy or markets.

Marks referred to the Fed as the “home of more than 400 Ph.D. economists” and one of the world’s biggest producers of economic forecasts.  Marks cited economist Gary Shilling, who wrote: “The Federal Reserve’s forward guidance program has been a disaster, so much that it has strained the central bank’s credibility.  Chair Jerome Powell seems to agree that providing estimates of where the Fed sees interest rates, economic growth and inflation at different points in the future should be junked.”

Marks believes it’s better to acknowledge “you can’t know the future; you don’t have to know the future; and the proper goal is to do the best possible job of investing in the absence of knowledge.”  Navigate, don’t predict.

According to Warren Buffett, in addition to economists being lousy forecasters, “something different happens all the time.  And that’s one reason economic predictions just don’t enter into our decisions.  Charlie Munger – my partner – and I in 54 years now never made a decision based on an economic prediction.  We make business predictions about what individual businesses will do over time, and we compare that to what we had to pay for them.

“But we have never said “yes” to something because we thought the economy was going to do well in the next year or two years. And we have never said “no” to anything because we were right in the middle of a panic.  There’ are so many variables. I mean, in the hard sciences, you know that if an apple falls from a tree, that it isn’t going to change over the centuries because of anything or political developments or 400 other variables that go in. But when you get into economics, there’s so many variables, and the truth is, you’ve got to expect good times and bad times in business.”

Buffett buys “great businesses with great managers,” who will be able to succeed during difficult times just as they would during good times.  “We’re going to have good years, bad years, in-between years and maybe a disastrous year some year,” he said.  “We care a lot about the price.  We do not care about the next 12 months.”

For us, this means we invest in businesses, not stock ticker symbols.  Although stock prices are driven by fear and greed and are very volatile, the value of the underlying businesses don’t change that much from day-to-day.  The businesses we own are profitable now, generate more cash than they consume and generally have “pricing power.”  They also generally have “clean” balance sheets with lower-than-average debt levels.  We believe stocks of companies with these characteristics will fare much better in an environment of higher inflation/interest rates than those whose eventual profitability is many years down the road (if at all) and were dependent on an endless stream of cheap credit.

“Fear of loss” is human nature, as is the primal instinct to “flee to safety” in times of danger.  We understand the uneasiness and are impacted by those same feelings.  However, if you’ve built and own a great business, would you sell it just because there might be tough economic times ahead?  We think the answer is a resounding “no.”  That’s why it’s critically important to distinguish between a “permanent” loss (caused by company’s business prospects suffering a mortal blow) versus a “temporary” loss (caused by stock market volatility).

Temporary losses are an unpleasant, but normal part of investing in stocks.  Unfortunately, many investors turn temporary losses into permanent losses by selling during downdrafts.  Our primary charge as your investment adviser is to navigate and guide you through the inevitable short-term storms that appear along your long-term investment journey and encourage you to stay the course and stick to your plan.

We’d like to reiterate the three points made in last quarter’s letter, as we feel they still remain true today: 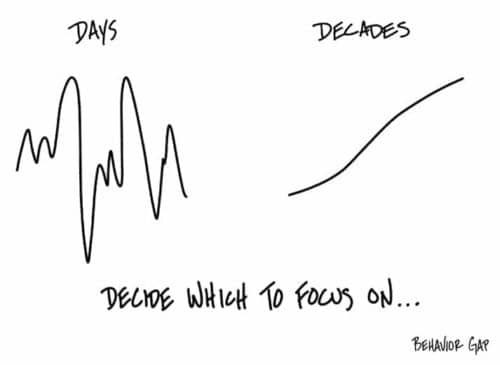 Under Securities and Exchange Commission Regulation S-P, KM is required to deliver its Privacy Policy Notice to each client prior to the establishment of an account and updates annually.  We are delivering our 2022 annual update to each client account with this letter.  In addition, given the increasing importance of protecting clients’ personal information, we have implemented a policy whereby KM personnel will not release any information about a client’s account without specific authorization from the client.  If you would like KM to release information about your account to your CPA or other service provider, please contact Director of Client Service Matt Kirr (matt@kirrmar.com), Associate Director of Client Service Zach Greiner (zach@kirrmar.com) or Associate Director of Client Service Maggie Kamman (maggie@kirrmar.com)   by e-mail or at 812-376-9444 or 800-808-9444.

Past performance is not a guarantee of future results.
The S&P 500 Index is an unmanaged, capitalization-weighted index generally representative of the U.S. market for large capitalization stocks. This index cannot be invested in directly.