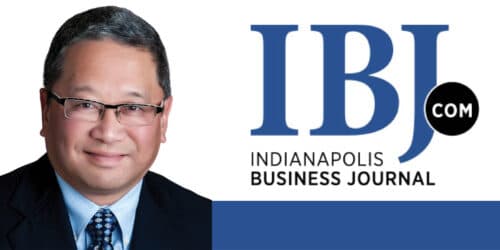 I never make predictions, particularly in writing, but it’s a sure bet the vitriol and partisan political assault we’re going to be subjected to over the next 100 days will make 2016 seem like an ice cream social.

Both Trump and Biden (and their supporters) predict doom if the other is elected.  Information is filtered through the lens of confirmation bias, our tendency to give too much weight to findings that support our existing beliefs.  Unfortunately, it’s increasingly rare for folks (including me) to listen openly to opposing views, let alone seek out alternate perspectives and attempt to understand.

As Simon & Garfunkel sang in The Boxer, “a man hears what he wants to hear and disregards the rest.”

As the partisan storm increases in intensity over the coming weeks, you may be tempted to make changes to your portfolio because of how you believe a short-term event like an election will impact the financial markets.  Don’t.  Making an anxiety-based change because of your political beliefs will be harmful to the long-term health of your portfolio.

The president is only one of many factors that influence the market.  Others, including corporate profitability, interest rates and inflation may have more impact than who resides in the White House.

Sam Stovall, Chief Investment Strategist for Wall Street research firm CFRA, dissected price changes for the S&P 500 going back to 1945 based on election results.  He will soon be publishing his findings, but graciously provided me with his data.

Since WWII, incumbents running for reelection won 80% of the time (Truman, Eisenhower, Johnson, Nixon, Reagan, Clinton, Bush 43 and Obama) and lost only twice (Carter and Bush 41).  Additionally, the S&P 500 has been a good predictor of whether the incumbent president, or his party, was reelected or replaced.

In presidential election years since 1944, when the S&P 500 rose in price from July 31 to October 31, the incumbent or his party was reelected 82% of the time.  This indicator failed in 1968 (Humphrey lost to Nixon) and 1980 (Carter lost to Reagan).  Conversely, when the S&P 500 lost ground, it signaled the replacement of the incumbent 88% of the time.  The only failure was Eisenhower’s defeat of Stevenson in 1956.

Try not to fret about things you can’t control.  Instead, develop an investment plan based on your long-term goals and stick to it.  Your financial future will depend far more on how much you save and invest, not who wins the election. 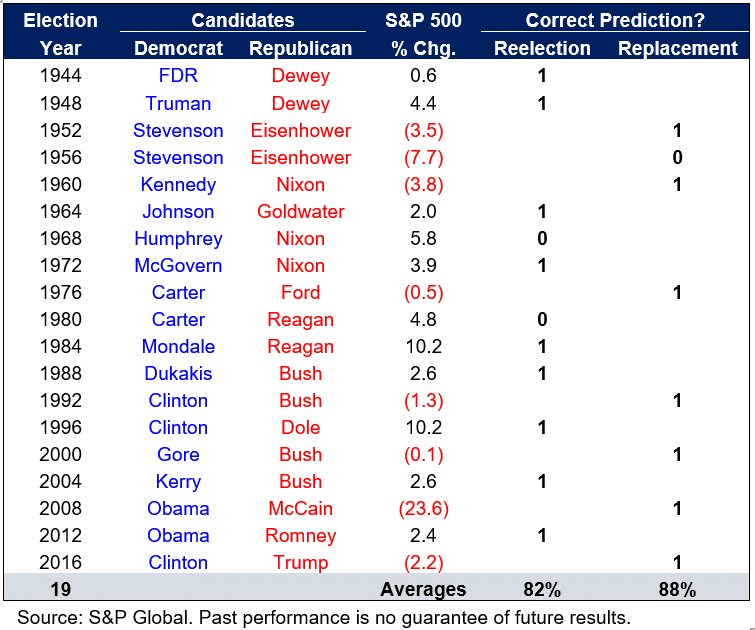 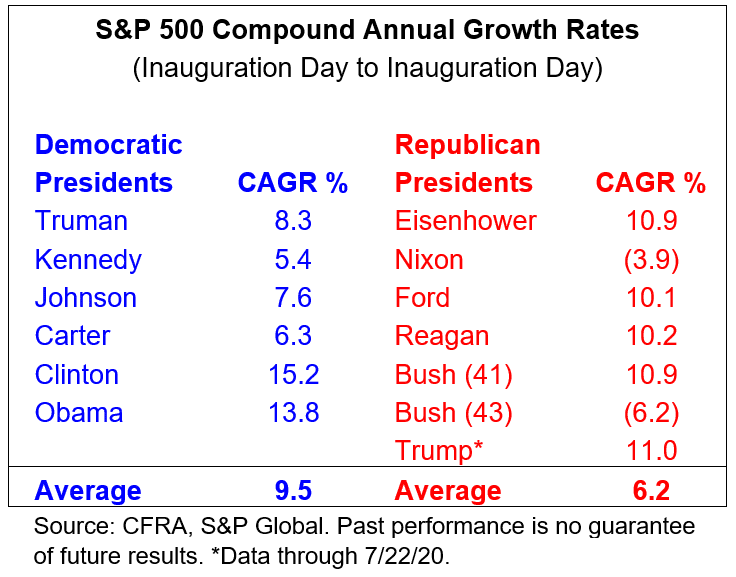