Happiness is getting get off the ‘positional treadmill’

Previous Next
Happiness is getting get off the ‘positional treadmill’ 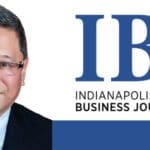 Happiness is getting get off the ‘positional treadmill’

So says my friend, Carl Richards, founder of behaviorgap.com, his website that offers “simple sketches and a few hand-crafted words about money, creativity, happiness and health.” Carl is a Certified Financial Planner with a knack for using cocktail napkin sketches and a few words to explain financial concepts.

In 1949, Harvard professor James Duesenberry created the “Relative Income Hypothesis,” which says the utility we derive from consumption depends on what we consume and how much we consume relative to others. Because of this, we believe and act as if both what and how much we consume indicates where we stand in the societal pecking order. According to Richards, people tend to spend more “because the higher spending of others kindles aspirations they find difficult to meet.”

In reality, Homo Economicus is a mythical character existing only in theory. Not only are humans highly emotional and lacking in self-control, they are influenced by all sorts of biases. They act on biases in irrational and predictable ways, often leading to poor decisions. In fact, we’re more like Homer Simpson.

Richard Thaler of the University of Chicago’s Booth School of Business was a pioneer in the field of behavioral economics, the study of how psychology and economics intersect. He won the Nobel prize in economics in 2017 because “by exploring the consequences of limited rationality, social preferences and lack of self-control, he has shown how these human traits systematically affect individual decisions as well as market outcomes.”

Your neighbor rolls up in a brand new Ferrari. According to Richards, not only do you make a subconscious judgement about your neighbor based on the car she is driving, you become more likely to spend more on your ride just to keep up with her.

Why? As Homer Simpsons, we create stories that fit the “facts.” In this case:

As Richards points out, this story is a “house of cards, layer upon layer of assumptions that have no basis in reality.” Your neighbor may have borrowed the car from her sister. Even if she bought it, maybe owning a Ferrari was her lifetime goal and she has $0 saved for retirement. Even if she’s rich, do you know any miserable rich people? We just don’t know.

Similarly, if your employer offered to double your salary, would you jump at the chance? Of course you would! However, you’ll probably be surprised to learn this “no brainer” decision depends on whether someone else is involved.

Classical economists assume “utility” is a function of an individual’s “endowment.” In other words, more of a good is better, independent of the individual’s relative position. However, a 1995 survey of faculty, students and staff at the Harvard School of Public Health showed people do not act independently of relative position, which can have a powerful and dangerous behavioral influence.

The survey consisted of twelve questions, each containing two states of the world. In each state, respondents were told how much of a good they had and how much others had.

Researchers asked respondents which of two worlds they would prefer to live in: State A (“Positional”), earning $50,000 per year while others earn $25,000 or State B (“Absolute”), earning $100,000 per year while others earn $200,000. Unbelievably, about half of the respondents preferred earning 50% less, as long as their relative position was high.

The challenge of being on this “positional treadmill” is the goal-line is always moving. Basing our feeling of self-worth and spending on stories we tell ourselves is just plain crazy. 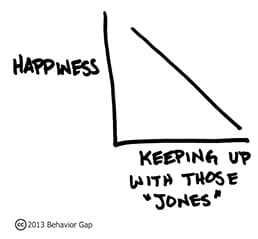