Skip to content
Investors should resolve to “KISS” in 2022

Investors should resolve to “KISS” in 2022

Behavioral finance shows investors act more like the imperfectly irrational and illogical Homer Simpson than the perfectly rational and logical Mr. Spock.  It’s human nature to believe complex solutions must be superior to the simpler variety.  Unfortunately, not only is this belief faulty when it comes to investing, but there’s a very real price to pay.

That’s the message from Morningstar’s report, “Mind the Gap 2021—A report on investor returns in the United States.”  According to the report, investors consistently hurt themselves with wrong-footed attempts to “time the market” and by chasing past performance, when they would be far better off to “keep it simple, stupid (KISS),” a design principle adopted by the U.S. Navy six decades ago that states simplicity should be a key goal and unnecessary complexity should be avoided.

Morningstar studied the dollar-weighted returns (also known as investor returns) and calculated investors earned about 7.7% per year on the average dollar they invested in mutual funds and exchange-traded funds (ETFs) over the 10-year period ending December 31, 2020.  Unfortunately, this was about 1.7% less than the 9.4% annual total returns (which assume a lump-sum investment made at the beginning of the period, with no purchases or sales made in the interim) of the funds themselves.  This shortfall or “behavior gap” (a term coined by Carl Richards, CFP) can be attributed to “inopportunely-timed purchases and sales of fund shares, which cost investors nearly one-sixth the return they would have earned if they had simply bought and held.”

There was a wide disparity in both investor and fund returns between fund types.  Simple, “plain vanilla” U.S. equity funds returned 13.20% annually, while investor returns were 12.03%, a behavior gap of -1.17%.  Further along the complexity scale, sector funds (which allow you to invest/bet on individual sectors like health care or technology) returned 11.33%, but investor returns were only 7.38%.  The         behavior gap of -3.95% cost investors more than a third of the return if they had bought and held.  Finally, “alternative” funds, which utilize complex strategies and/or financial instruments, had both the lowest total return (4.08%) and investor return (-0.25%) and largest behavior gap (-4.33%).

This meant investors attracted to the complexity and siren song of alternative funds cost themselves 12% a year, compounded for 10-years versus investors who opted for the simplicity of plain-vanilla equity funds, an enormous penalty.

The ARK Innovation ETF (ARKK) is a great example of many of Morningstar’s points (see my September 3, 2021 column, “Will ‘disruptive innovation’ prophet’s flock need an ‘ARK’?”).

ARKK’s 41.3% annualized return over the past 5-years places it in the top five (not 5%) of best-performing U.S. equity funds and ETFs, walloping the its benchmark S&P 500 by more than 15% per year.  However, after adjusting for the timing of cash inflows and outflows, Morningstar estimated investors earned less than one-fourth of that return or 9.9%, a behavior gap of -31%.  Instead of beating its benchmark by 15%, ARKK’s investor returns actually trailed by about 8% per year.

The huge difference between ARKK’s stated returns and investor returns is because most of ARKK’s spectacular performance occurred when it had far fewer shareholders than now.  In fact, about 90% of the dollars invested in ARKK since its inception in 2014 came in 2020 and 2021.  Further, the majority of 2020 inflows didn’t occur until late in the year (particularly December), so most investors who bought that year didn’t fully benefit from its 152.8% return (vs. 18.4% for the S&P 500). 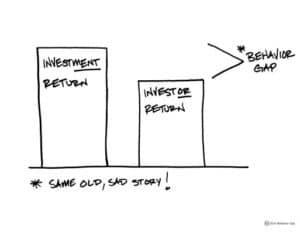 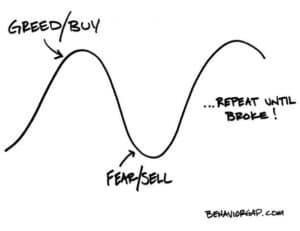